Menorca is the capital of Menorca on the Balearic Islands 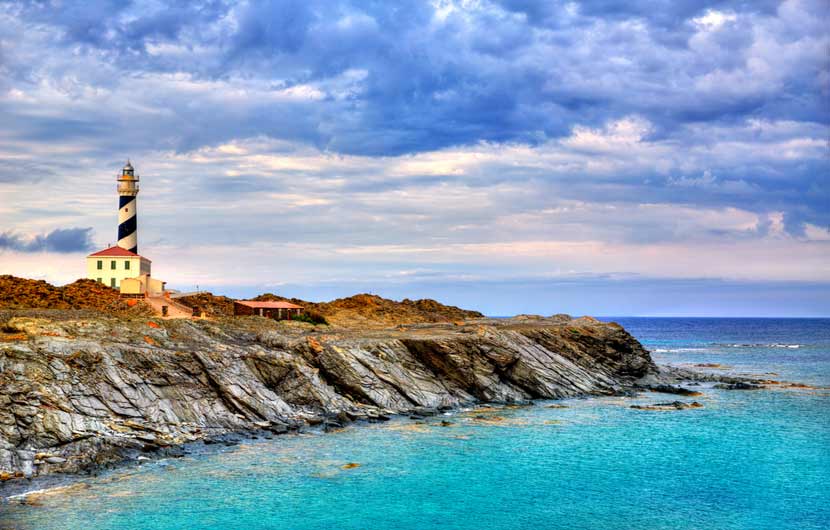 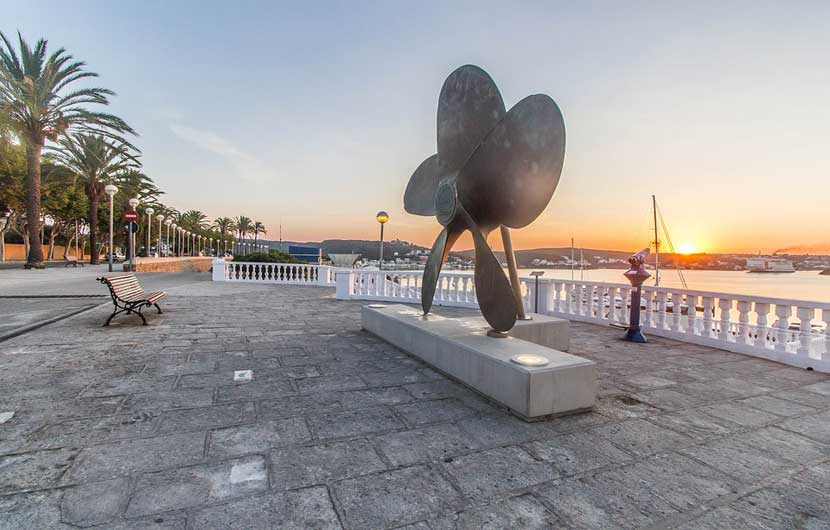 Mahon is the charming capital of the Balearic Island of Menorca, it is the first stop for many visitors before heading off to the resorts. The city  is know for it's Georgian style mansions,  testament to the British occupation from times gone by and an attractive harbour area and restaurant lined promenade.

The lovely city of Mahon is the capital of Menorca and is the first port of call on the island for most visitors before travelling to the main holiday resorts.  Travel and tourism on Menorca is synonymous with quality beaches, clean seas, quaint hotels, and charming holiday resorts. The city offers an excellent selection of accommodation including an array of hotels in Mahon, apartments, hostels and converted mansions.

Mahon has one of the largest natural harbours in the world and is a lovely place to spend a day and evening dining in one of the many good quality eateries that are located around the port area.  Delicious local cuisine, a fun and buzzing nightlife along with a pleasant family atmosphere make for a great stay. A popular stop over in the harbour area is the  Xoriguer gin distillery, where you can help yourself to free samples of gin, various liqueurs and other spirits before buying.

A stroll around the picturesque city if Mahon

The Menorca Museum  is built on the foundation of a former monastery, being the place where you can learn about the history of these places. The Museu de Menorca is an excellent museum housing a large selection of prehistoric artefacts, beginning with objects left by the Neolithic pastoralists who settled here about 4000 BC, there’s also an extensive range of material from the Talayotic period.

Iglesia de Santa Maria is the main church of the city, enjoying a beautiful architecture, there is an 18th century Town Hall and a British Clock Tower also worth a visit.

Head down to the Plaza de España and you will see the Placa Carme, home to a Carmelite church whose cloisters have been adapted to house a variety of shops including fruit and vegetable stalls plus a large supermarket in the basement. The Plaça Espanya offers views right across the port and bay and is home to the  Mahon’s fish market, in operation since 1927.

The charming church of Sant Francesc has a Baroque facade which appears as a cliff face of pale golden stone set above the rounded, Romanesque-style arches of its main doorway. This lovely church was built during the seventeenth and eighteenth centuries, following the construction of the town by Barbarossa in 1535. Although the nave is quite poorly lit, it’s still possible to pick out the pinkish tint in much of the stone and the unusual spiral decoration of the pillars. To the north of the nave is the Chapel of the Immaculate Conception, with its amazing array of vines and roses. The chapel is accredited to Don Francesc Herrara, who trained in Rome and designed many cultural works around both in Menorca and Mallorca.

For shoppers head to the Placa de Esplanade located in central Mahon, here you can shop in one of the many stylish boutique shops or buy fresh the fruit and vegetables at the street market which is run every Tuesday and Saturday, from  9am to 2pm, here you can find all kinds of souvenirs, shoes, clothes and accessories.

The city organises some amazing festivals and fiestas, which see the whole town come to life, with street acts, dancing and music, and where delicious foods are shared and enjoyed on the streets by locals and visitors alike.

The beaches around Mahon are mostly isolated and peaceful, located along the steep cliffs: Punta de Mongofre, Es Canutells, Sa Mesquida and Illa d’en Colom are just a few of them.

Mahon offers visitors plenty of dining options with a wide variety of bars, restaurants, and cafeterias where you can try the cuisine of Menorca, based mainly on fresh fish.

Mahon has a place in culinary history as the eighteenth-century birthplace of mayonnaise ( mahonesa ). There are many legends regarding this now world famous food, some of the most well know say it was invented by the chef of a French commander, a housekeeper who tried to disguise the taste of some rancid meat and a peasant women dressing the salad of a French General, take your pick.

Mahon`s culinary offerings these days are based on Spanish, Catalan and Italian dishes, all of which are in abundance via a large selection of restaurants, tapas bars and cafeterias located all along the quay around the harbour as well as the central part of the city.

Stunning beaches and coves around the Balearic Islands 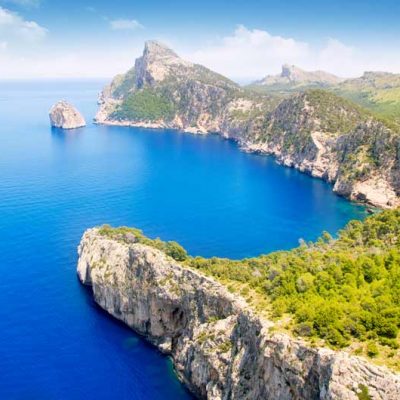 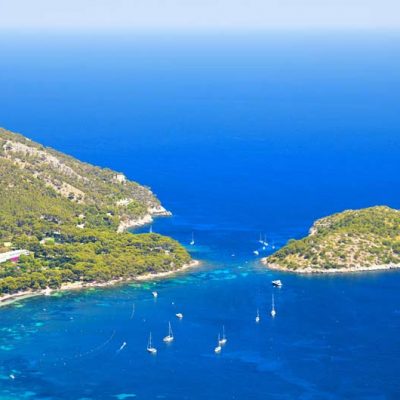 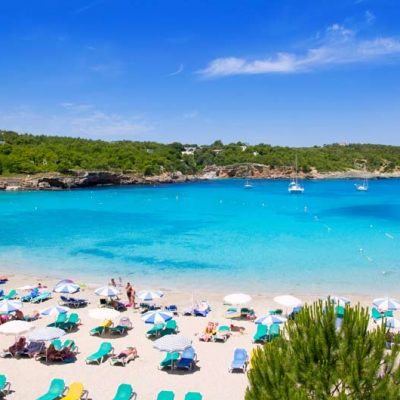 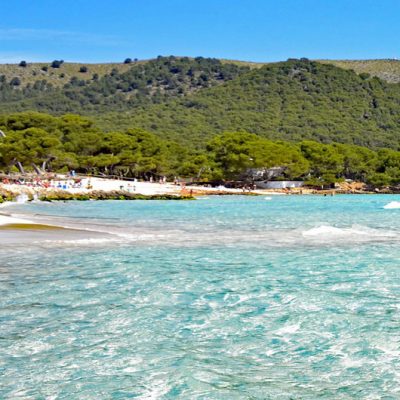 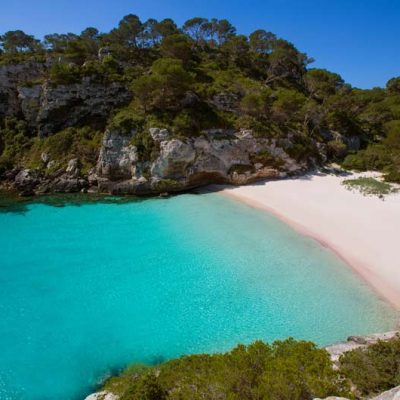 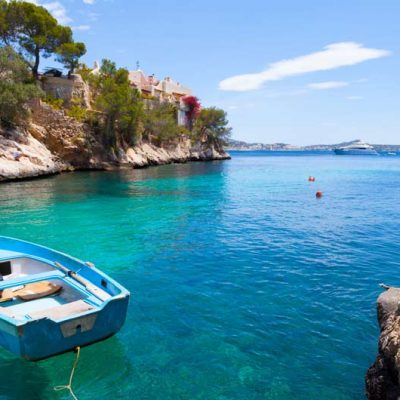 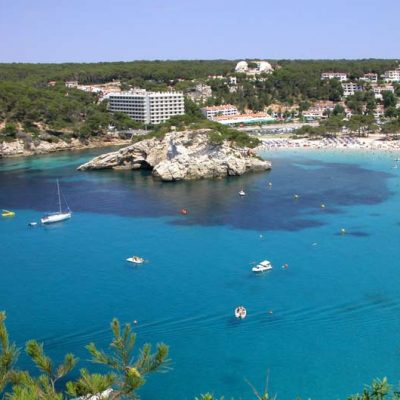 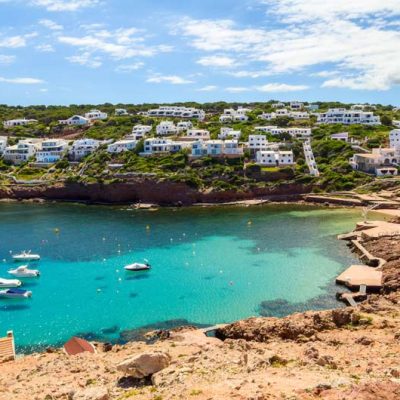 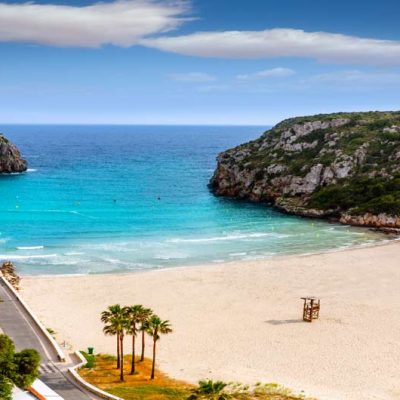 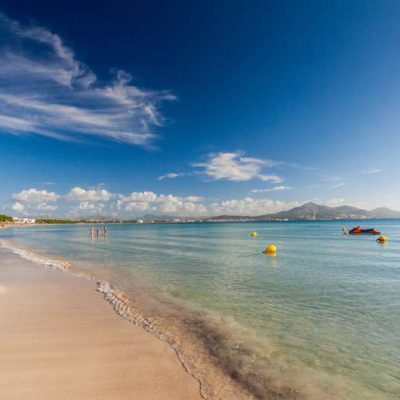 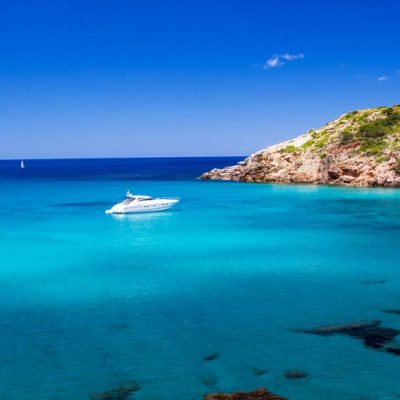 The 4 star Jardi de Ses Bruixes Boutique Hotel offers exquisite accommodation in the heart of the old town. If you are looking for a larger hotel with lots of amenities this hotel is not for you, however if a more tranquil laid back holiday is your preference then this could be your best option. Reviewer Rating: 9.9

The Casa Ladico Boutique Hotel offers 5 star accommodation in the city of Mahon. With 14 exceptionally  modern and stylish rooms and close to all the cities top attractions including the port,  the  S'Albufera des Grau Natural Park and Es Grau are just a short car ride from the hotel. Reviewer Rating: 9.9

La Isla Hostel is a charming guest house located in the heart of the Mahon with 22  recently refurbished rooms and an outdoor terrace, free wifi, private bathroom, an on-site restaurant and a cosy lounge bar.   La Isla Hostal is close to Mahon's popular attractions, with Mahon Port just a 10-minute walk away and a short car ride away from Es Castell and Sant Lluis. Reviewer Rating:  8.8