A Guide To Cordoba in Spain

Cordoba is an ancient city and an autonomous region of Andalucia in Southern Spain. The city is famous for it's Mezquita Arab Palace, historic sites, olive groves, decorated patios, olive oil and colorful festivals.

The region also produces many renowned wines such as the sherry-like wines.  Montilla wine is one the most popular and comes from the town of the same name. The wine is a mellow, dry sherry popular to drink during festivals.

Cordoba is a popular destination with visitors who flock to see the picturesque flower clad patios during the “Festival de los Patios” held in May.  Also, some of the finest flamenco dancers on the Iberian peninsula come from Cordoba.

In this ancient city, three cultures stand side by side like no other place on earth.

10 Top things to do in Cordoba

The Mosque - Cathedral of Cordoba 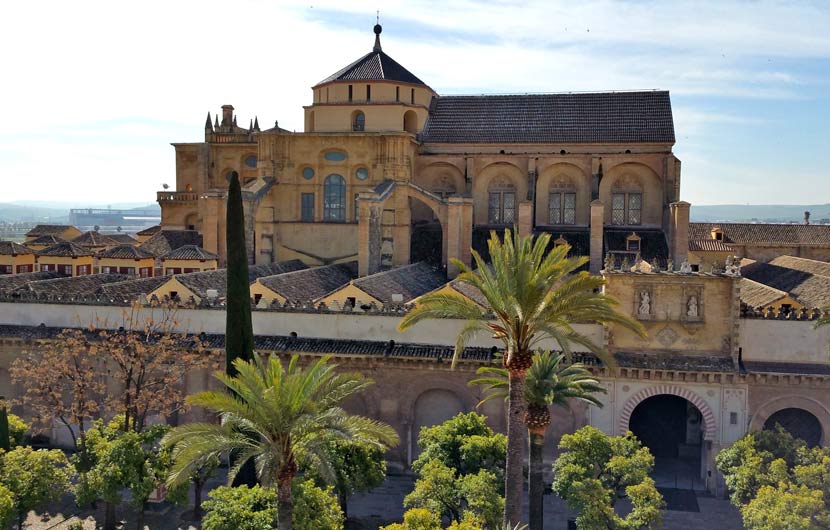 Cordoba was the former capital of Moorish Spain, when Ruler Abd ar-Rahman II began the construction of Cordoba’s Great Mosque, La Mezquita, as an alternative to Mecca. It dates back to the 900's and is certainly one of Spain's cultural wonders.

It is home to around 850 columns, the great hall and gilded calligraphy. It is written that the Mezquita contains an original Quran and the bones from the arm of the ancient prophet; it one of the most sanctified places on earth.

Visitors to the Mezquita enter through the Patio de Los Naranjos, a classic Islamic courtyard with orange trees and fountains, used for ritual purification before praying.

Retaken from the Moors in 1236, the Christian Kings added a number of chapels and a new nave added in the 1500s.

For further information and tickets visit the official Mezquita website.

This fasinating historic site has a long and interesting history.

Visitors are treated to picturesque gardens, courtyards, Arab baths and one of the largest libraries in Europe and the impressive Albolafia waterwheel.

Once the site of Visigothic fortress it was taken by the Umayyad Caliphate. It fell to the Christian forces in the 13th century and became a palace.

For 300 years it was one of the principal courts of the Spanish inquisition.

The courtyards festival is held during the first to weeks of May and is where locals open up their colourful courtyards and patios to visitors.

The courtyards are full of late spring flowers offering an explosion of colours and smells.

Patios and courtyards can be found all around the city although the main areas include the Alcázar Viejo district, between the Alcázar and the parish of San Basilio. They can also be seen close to the Church of San Lorenzo. La Magdalena, the Mosque-Cathedral and the old Jewish quarter.

The town hall organises competitions for the best courtyards dating back to 1921. 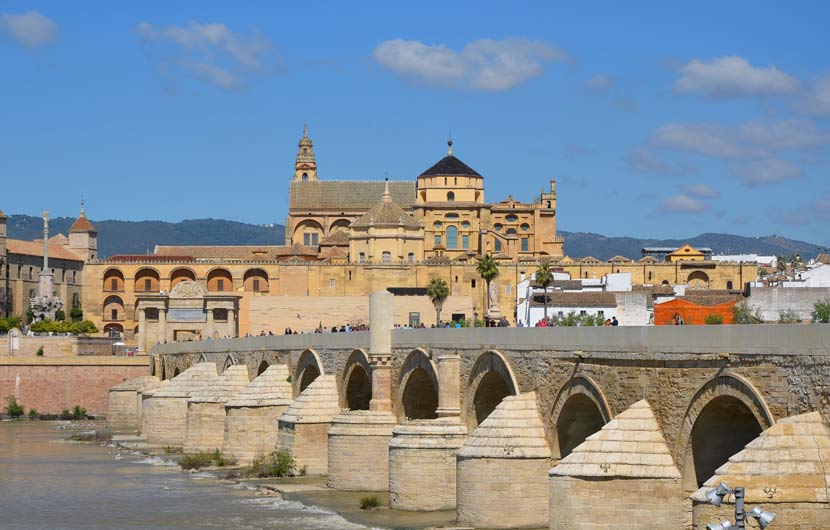 One of the most iconic sites you will see in Cordoba is the Augustin Roman bridge which crosses the Guadalquivir river.

Although the bridge dates back to the 1st century the structure is completely medieval.

With 16 arches and impressive views of the city as you cross the bridge, a great opportunity to get those perfect holiday snapshots.

This impressive bridge played a starring role in season 5 of the Game of Thrones tv series.

After a long day of visiting Cordoba's historic sites head off to the cities main square, the Plaza de la Corredera.

The square has been used for numerous different events in the past including bullfighting and the cities food market. It is now often used to host local festivals and concerts and of course is one of the main meeting points for local residents.

Built-in the late 1600's this impressive plaza is a perfect place to chill out and enjoy the surroundings. 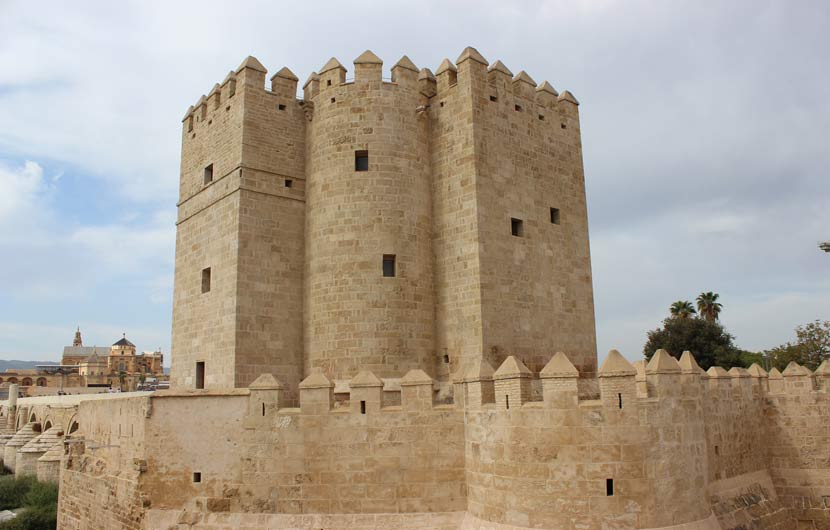 The Calahorra tower was built in the 13th Century by the Almohad Caliphate to guard the southern entrance of the Roman bridge.

It was reinforced by Henry II during the 14th century, a design which you see today.

In the past, the tower has served as a prison and even a girls school.

The tower is well worth visiting and is home to a museum which offers 3D presentations of the city. 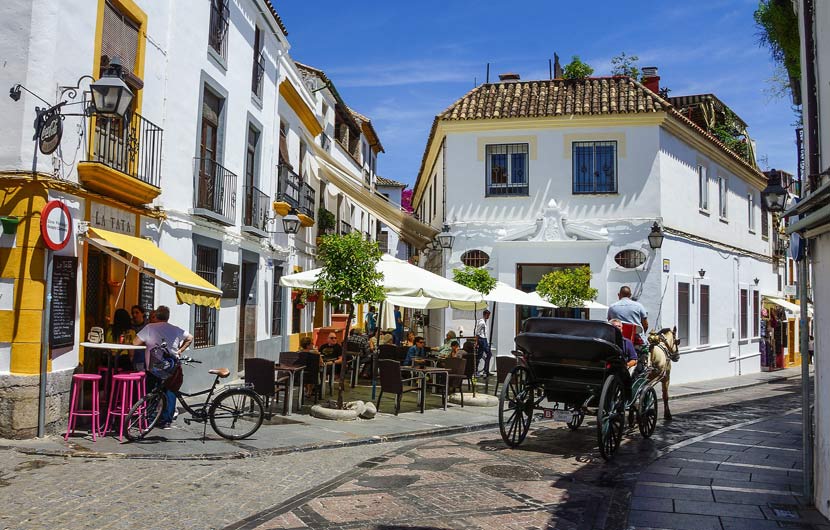 Cordoba has one of the largest old towns in Spain and is a great place to simply stroll around and take in the atmosphere.

Visitors can admire the picturesque courtyards, typical homes and local architecture plus stop off at one of the many small tapas bars.

North of the Mezquita lies the Juderia, Cordoba’s old Jewish quarter, an important world centre of Jewish culture in the Spanish Middle Ages.

The area remains largely unchanged and is packed with narrow streets and white-painted limestone houses and photogenic overhanging balconies.

An important monument here is the old Synagogue, built-in 1492 and still standing on Calle Judio.

Top Places To Eat out in Cordoba

There are many bares and restaurants where you can enjoy authentic Spanish cooking, here is the pick of the top places to eat out in Cordoba.

El Churrasco, Calle Romero 16 ( not Calle Romero Barros); tel 957 290 819. Expensive and renowned restaurant, famous for its churrasco (a grilled pork dish, served with pepper sauces) and Salmorejo (a thick Cordoban version of gazpacho with chunks of ham and egg).

Taberna San Miguel (El Pisto), Plaza San Miguel 1, behind the church. Known to all as El Pisto (the barrel) this is one of the city’s legendary bars – over a century old – and not to be missed. Wonderful Montilla and tapas; Rabo de toro and Callos en salsa Picante (tripe in a spicy sauce) are house specials.

In July and August, it can be extremely hot with temperatures reaching over 40 degrees So if you are thinking of visiting the city during those months be prepared

Our advice is to wear very light clothing, stay in the shade as much as possible especially between the hours of 12 and 4 pm and always carry a bottle of fresh cold water.

In these conditions, it is advisable to drink at least one litre of water every day.

Recommended hotels and places to stay in Cordoba

For a real treat the Hotel Hospes Palacio Del Bailio is a perfect choice if you are looking for a luxury hotel in Cordoba.

Situated within a a converted mansion the service and facilities are excellent including a limousine service and Bodyna Spa.

The superior rooms are a delight, there is a comfortable lounge bar, central patio and first class restaurant.

If you prefer to eat out, there are plenty of bars and restaurants close by as is some of Cordoba's top attractions.

A popular hotel in the mid range is the modern Hotel Eurostars Palace Cordoba.

Located right by the Victoria Gardens on the eastern outskirts, it is still within  few minutes walk of the historic centre and easy access to all the major attractions.

If you are on a budget when it comes to accommodation try the well appointed 1 star Hotel Don Paula.

Ideally located in the heart of the city close to many top attractions including the Flamenco Theater, The archaeological Museum and the Municipal Archive.